This past summer, I had the opportunity to intern with the UrbanHeatATL team. UrbanHeatATL is a community partnership between researchers at Georgia Tech and Spelman College, local partner organizations, and community scientists. The goal of UrbanHeatATL is to map accurate, surface-level heat data in Atlanta. In March, UrbanHeatATL presented a panel of urban heat experts during the Atlanta Science Festival (Dr. Marshall Shepherd, Dr. Jeremy Hoffman, and Dr. Jalonne White-Newsome). The experts shared important insight on what causes urban heat, what can be done to mitigate heat, and how communities in Atlanta are affected by the urban heat island effect. While I found the panel informative, I (and a few other UrbanHeatATL interns) noticed it was missing input from community members with firsthand experiences of Atlanta's urban heat island.

To better incorporate community voices into UrbanHeatATL’s work, I partnered up with my fellow interns, Sabrina Johnson and Reyla Ponder, to host a community conversation about urban heat. West Atlanta Watershed Alliance (WAWA), an UrbanHeatATL partner, graciously allowed us to host the conversation at WAWA’s Outdoor Activity Center in the West End neighborhood in southwest Atlanta. Eight community members were in attendance; four joined in person and four joined via Zoom. The event began with a 15 minute presentation on urban heat and transitioned into a discussion that lasted well over an hour. We prepared a series of questions to guide the discussion, such as “What parts of Atlanta do you think are hotter or cooler than others?” and “When it is hot outside, what are some ways that people can cool off?”. We also offered a brief, online survey for those who wished to respond anonymously.

The survey, which had a 50% response rate, also shed some light on community perspectives. For example, all survey respondents felt that there were enough trees outside to make it shady, but at least one respondent said they were unsure of methods to stay cool in urban heat. One survey respondent asked “What is the City of Atlanta doing to help residents cope with urban heat?”. We weren’t able to speak on behalf of the city, but interns shared what UrbanHeatATL’s partnership with the City was hoping to accomplish.

The community conversation not only exceeded, but challenged my expectations around community engagement. Even though the event was small, we engaged in a productive conversation that assisted in better aligning UrbanHeatATL’s mission with the needs and expectations of the communities the project seeks to serve. This experience also helped me grow personally as a researcher and community activist. Being able to engage with the West Atlanta community in a meaningful way inspired me both in the work I was doing with UrbanHeatATL and for future community engagement opportunities in other projects. 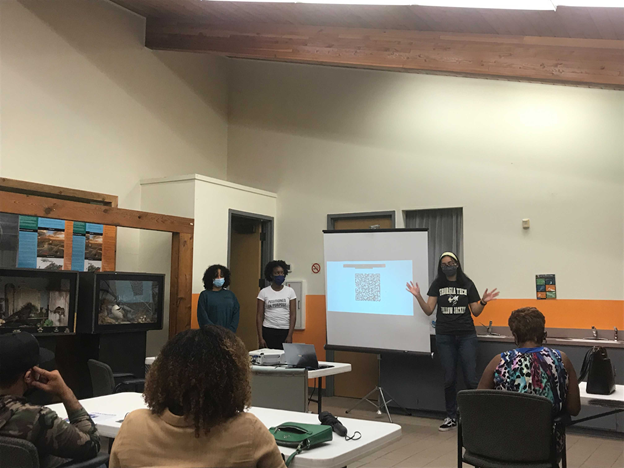