On the Difficult, Necessary Work of Leaving the Silo: Avoiding Unintended Consequences by Joe Brown (see below)

In the Fall of 2016, Serve-Learn-Sustain convened its first Fellows program around the theme of Food, Energy, Water Systems, otherwise known by its acronym, FEWS. The program brought together 31 faculty, staff, and graduate students to participate in a series of events and workshops, and work together on collaborative projects of their choosing. The events included field trips to the Emory Water Hub, the Atlanta Community Food Bank, and Southface, and the workshops covered both strategic and tactical concerns in grant writing, teaching, and developing community partnerships. 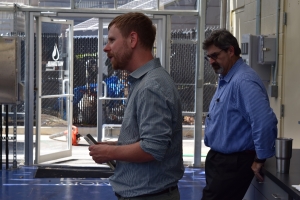 We led, or rather coordinated, the Fellows program. This was challenging but all together an exciting endeavor. How do you bring together, in a meaningful and substantive way, faculty from every college on campus, across every rank, together with research scientists, program directors and managers, and graduate students? How do you develop opportunities for the participants to discover and act on common ground? Our approach was to embrace the pluralism of our community and to provide encounters that we believed would spark the interest and imagination of our colleagues and lead to both deep disciplinary and broad transdisciplinary collaborations.

Based on the reflections that Fellows submitted at the end of the program, we think we were successful at that. Indeed, it’s when you read across them all that you can best appreciate the depth of the engagement and breadth of the interdisciplinary thinking that the program engendered. Below are links to a few that we chose to call out because we think they are particularly representative of the ambition and outcome of the FEWS Fellows Program. In these entries, we see multiple fields and applications swirling together--like Chemistry and Composition, Mechanical Engineering and K-12 education--in novel and exciting ways that clearly will affect research and learning at GT.

It’s fair to say, for both of us, across our time here at Georgia Tech, this was one, if not the, most interdisciplinary projects we have been a part of. And not only was it interdisciplinary, it was truly open and engaging across the disciplines. We were witness to conversations between colleagues that might not have ever happened otherwise. We were witness to the development of ideas borne of those conversations that brought together diverse fields, practices, and perspectives to propose truly novel work. And throughout, together with our colleagues, we were witness to an experiment of broadening our notion of what FEWS is, and what FEWS might be, with a focus on issues related to creating sustainable and just communities.

Reflections from some FEWS Fellows:

William Winder, School of History and Sociology, The Political Economy of the Global Meat Industry

On the Difficult, Necessary Work of Leaving the Silo: Avoiding Unintended Consequences by Joe Brown

The Serve-Learn-Sustain FEWS Fellows program brought together faculty, researchers, staff, and students across all six Georgia Tech colleges to explore opportunities for collaboration and innovation. This initiative created a space for new conversations on FEWS, bridging disciplines and allowing for fresh approaches to some of the most intractable problems affecting humanity. Also, it was a lot of fun. Personally, I got to meet several new collaborators and am excited about the work we’ll do together going forward. 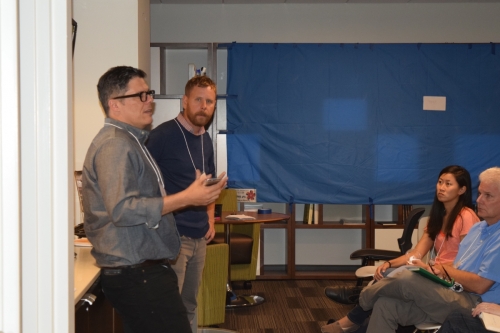 The process has got me thinking about why we do this sort of work. Why reach outside our narrow disciplinary “comfort zones” and do the hard work of trying to have a substantive discussion with a public policy expert, a computer engineer, and a biologist about the problem of clean drinking water? We speak different languages, approach problems from different perspectives. We lack a common basis for speaking in specifics to reach a shared understanding of the problem space. We must all agree that the conversation itself is valuable or we wouldn’t be having it - but why?

I had a chance to reexamine this question last week, as I began working on The Bridge Collaborative, an initiative led by The Nature Conservancy and involving scientists and policy makers across multiple fields. The overarching goal of the group is to lead integrated thinking about how to generate and make use of rigorous scientific evidence that combines international development work, environmental conservation, and global health – acknowledging the interconnectedness of these fields in many contexts. Currently, these areas – like FEWS - are highly siloed areas of research. Health researchers would typically not consider the impacts of a health intervention – say, improving urban drainage to eliminate breeding sites for malarial mosquitoes – on the health of a river ecosystem, or on the livelihoods of farming communities that depend on that river downstream. This initiative, like FEWS and One Health, is an intentional approach to solving problems across multiple sectors, and, if done well, they offer the opportunity to feed two birds with one scone [1]. I suppose that’s the primary motivation for working in interdisciplinary teams on complex, difficult, real-world problems that do not fall neatly into one area of research and require interdisciplinary thinking: we want to have the greatest impact. Also, the scope of the problems seems to require it, despite the obstacles we’ll encounter when we leave our siloes. We work on complex systems because they are important, in spite of the fact that such work is difficult, may be actively discouraged in academic research, and can result in real difficulties in academic careers because such work is not well aligned with institutional or disciplinary structures of reward or metrics of success.

But, I think there’s a much more compelling reason to take on interdisciplinary approaches to problem-solving, including FEWS: they can help us avoid creating other, new problems while we’re busy trying to solve a first problem. Examples abound. Increasing per-capita water use in most places in the developing world would positively impact health (more water for hygiene and for local food production), but may have dire environmental and long-term development impacts. Roads enhance local economies, but can bring disease. Pursuing problem solving in the real world is messy: we can often create unintended consequences. As someone at the Bridge Collaborative meeting put it: one scientist’s assumption is another scientist’s problem space.

I recall a book I read 25 years ago that impacted my thinking on this: The Arrogance of Humanism, by ecologist David Ehrenfeld [2]. Ehrenfeld’s observations on the limits of our ability to predict the consequences of our actions – and the dark side of our technological progress – are still relevant today. One example he cites (among many) is DDT – great for killing mosquitoes, but nearly wiped out bald eagles (and many other species) because it contributed to eggshell thinning, a problem that it wasn’t possible to know about when DDT was approved for widespread use. And there’s the classic but potentially apocryphal example of Operation Cat Drop, a story of best intentions gone horribly awry.

As engineers, we make things, do things. We intervene in highly connected and complex systems and throw things out of equilibrium, to which all phenomena tend. We are expert in using our left-brain mastery of detail, precision, and narrow focus to tackle single-dimension, well-defined tasks in a linear order. But most systems are nonlinear, most problems have dimensions well beyond our single focus, and our understanding of networks of interacting variables continues to increase exponentially. Everything is literally connected. This may not be much of an issue when we seek to understand phenomena within the controlled conditions of a laboratory. But as soon as we step foot into the real world, the problem space expands.

The engineer’s code of ethics is, in part, about minimizing harm to society. If we want to avoid doing harm by unintended consequences, we’ll do well to stimulate and incentivize efforts to tackle systems problems that cut across diverse fields. If we’re smart about how we approach problems, if we expand the problem space at the outset and involve overlapping fields, we may be able to identify and characterize downstream risks that a single-discipline focus might miss. At least, that’s the theory. 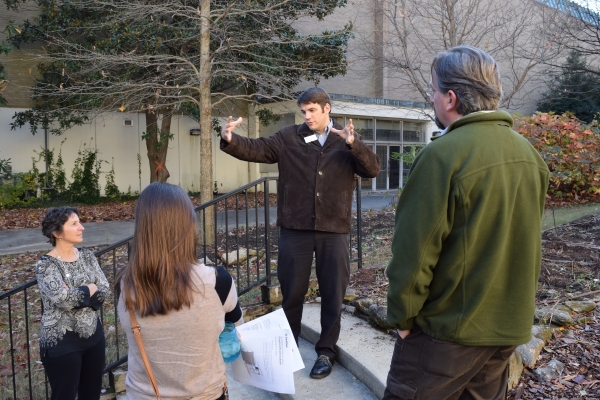 But how? How to know what’s “good enough” in terms of incorporating other viewpoints into research? The Bridge Collaborative is currently tackling this problem, articulating pathways for making this normative goal of interdisciplinarity a concrete reality. Certainly, some funders already require a broad focus or explicit incorporation of adjacent fields (e.g., USAID requires programs to address gender issues and environmental impact, even if these are not among the central themes of the proposed work). NSF’s FEWS program aims to fund only well-integrated proposals, which are required to make scientific contributions in multiple areas. Many health trials, especially large ones, will have a multi-disciplinary steering committee, with real decision-making ability. These are all well intentioned, but in practice, the adjacent areas often only get lip-service beside the narrowly-defined question of primary interest to the PI.

Still, one hopes that interdisciplinary research can avoid some pitfalls resulting from unknown unknowns [3]. That by bringing more expertise to the table, we can make some of the unknown unknowns into known unknowns – and figure out how to measure and deal with them.

True, some unknown unknowns are not going to be solved this way – they will be missed, possibly because of a failure of imagination [4] if the team doesn’t include representation across disciplines that might be impacted. And approaches to expand the problem space can also result in paralysis by analysis – inaction as the complexities continue to spool out, each requiring characterization and adjustment to the plan [5]. But the benefits of integration may well outweigh the disadvantages and further complexities, if only because the most important problems we face are no longer amenable to narrow solutions. If we’re serious about tackling the Grand Challenges (and avoiding creating new, potentially grander ones!), we cannot stay safely in our siloes.

[1] Kinder version of “killing two birds with one stone”.

[2] Along with E.F. Schumacher’s Small is Beautiful, this book was the only occupant of the shelf on “environmental philosophy” available in the Selma, Alabama library in 1994, when I was 15 years old and starting to read as much as I could about sustainability.

[3] Donald Rumsfeld’s enduring contribution to cocktail-party banter and keynote addresses is the knowns/unknowns typology: the most worrisome are the so-called Unknown Unknowns, those things that we don’t know that we don’t know.

[5] Including application of the Precautionary Principle if needed: the directive to avoid taking action when and where these actions might result in harms because the effects of that action are not sufficiently well understood and potentially seriously negative. For example, if a chemical’s health effects are unknown, let’s err on the side of caution and continue testing before it’s allowed into consumer products.